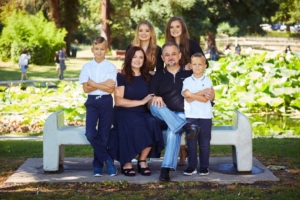 Vasyl Pechko is a Senior Pastor at the New Life Worship Center located in Sacramento California. He is married to Elina Pechko since 1989 Couple recently celebrated 30 Years Anniversary together they raised 4 children. The older daughter is Alina one year younger is Larysa then 1 7 years letter was born Aaron and two years down the road the last but not least was born to Pechko family baby Joseph. Vasyl was born in Western Ukraine in 1967 in a family of carpenter Joseph and Mary Pechko. Vasyl’s pastoral ministry began at the age of  28  then 5 years later he became an overseer in the Transcarpatia Region and was ordained to serve as Bishop.  In 2003 Vasyl with his family moved to USA and settled in Sacramento. He went to college and began studying English a few years later successfully graduated American River Collage with a Business and Accounting Degree. Vasyl still is in business as a tax accountant as well as a business consultant and ministry, as a Pastor at the same time since ministry is a calling from God and business is needed to provide for his family. To connect with Vasyl you can visit his Facebook Page clicking Media in a right top menu, Thank you for reading Vasyl’s Blog.